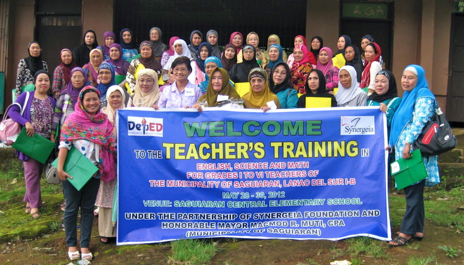 Mayor Makmod Muti welcomed the teachers to Saguiaran National High School, the site of the training program in English, Science and Math on May 28-30, 2012.  It was a welcome sight to see the teachers all dressed up smartly in their colourful Maranaw attires. The atmosphere was festive and cold, much like the Baguio weather.

The mayor reminded the teachers and administrators that the average NAT score of the students from Saguiaran is 50 percent.  He enjoined them to work together to improve the learners’ performance. He appreciates the LGUs partnership with Synergeia to enable them to lead in implementing education programs. He assured the teachers that education is the first priority of the municipality.  As proof, the LGU shouldered the cost of meals, transportation of teachers and other related training costs amounting to around P160,000.

The resource persons from Xavier University led by Mrs. Flerida Nery provided teachers with interactive activities. The teachers had no problem in grammar but they had difficulties in pronouncing some English words. Teacher Beng prepared a lot of exercises to improve their pronunciation. In Science, the teachers were very excited in conducting the experiments. The common complaint was the lack of materials and equipment that they can use when they get back to their schools. Teacher Connie encouraged them to be creative.  She demonstrated how materials that are commonly available in their communities can be used. The teachers were so enthused and sincerely appreciated the confidence, the knowledge and the skills that they developed.  “More, more, more”, they chorused.

Navotas City held its 1st Parenting Seminar entitled, “Wanted: Mabubuting Magulang” on June 1, 2012, in the newly built youth center of the city government. The PMT invited all schools within the city to send parent-leaders who will in turn conduct parenting workshops in their communities.

The seminar was a major success as the parents shared the lessons they gained through the workshops and the sharing of Dr. Antonio Torralba, Synergeia Trustee. Dr. Torralba asked the parents to reflect on how they can develop a trusting relationship with their children.  He gave them an assignment to say “I love you” not only to their children but to their spouses.

The parent-leaders showed great determination by staying throughout the entire event despite the uncomfortable venue due to the intense heat and humidity. They showed their desire to learn and become better parents to their children by actively listening and participating in the discussions. They prioritized attendance to the workshop even though they had other things to do like household chores and errands.

An emotional moment in the seminar was an interview with children who were asked to describe their relationship with their parents.  A tearful child wished spending more time with her mother.    Another said she would be happy if her parents attended programs where she was a participant.

The seminar made an even bigger impact on the participants due to the presence of Mayor John Rey Tiangco. Mayor Tiangco did not only oversee the execution of the event but also joined in the group sharing and discussed parenting tips, strategies, and gave advice to the parents. The participants greatly appreciated the mayor’s genuine concern for their problems.  In closing, Mayor Tiangco talked about the importance of parenting through example. He emphasized that a child’s mind is like a sponge which will absorb everything that s/he sees.

Every parent handed a written commitment to the Mayor on the specific things that they will do to support their children in becoming better students.

Mr. Washington SyCip convened a group of business leaders to discuss how to provide quality education to children in ARMM.  The group was highly enthused with the results of the education programs that were initiated with 11 Synergeia Mayors in ARMM.   The programs increased completion rate from 30 percent to 40 percent, improved performance in the NAT achievement tests from 30 percent to 50 percent, and reduced the dropout rate from 23 percent to 18 percent.  The business leaders expressed their willingness to “embrace” additional municipalities so that children can have better education.