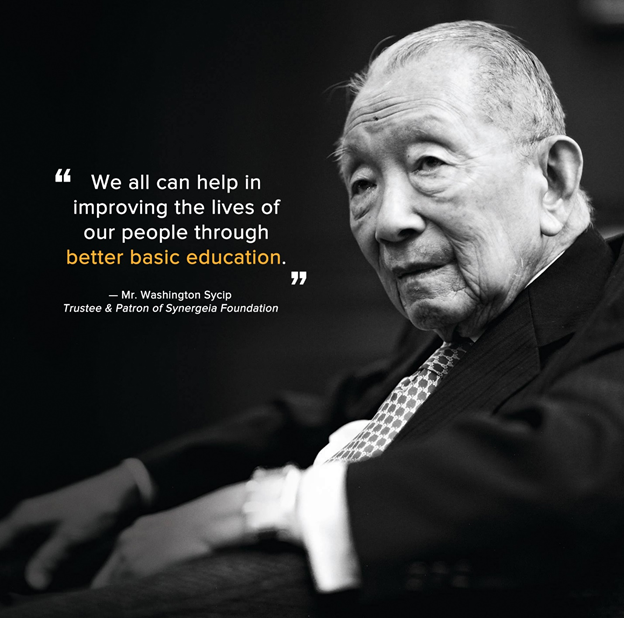 Mr. Wash SyCip should have been 99 years old on June 30 this year. He did not live to be 100 perhaps because he had already achieved his mission in life.  Through his example, he taught us that greatness lies in helping others, particularly the poor, so they can overcome the shackles that bind them to poverty.  He dedicated his life in helping children complete, at the very least, basic   education.  He always asked the question of how we can give them the best opportunities that are equal to, if not more than what he experienced when he was a student in Burgos Elementary School.

He brought the need to improve basic education to the center of consciousness of the nation.  He spoke about it in every forum.    He used his influence and gently pressured the leaders of the business community to earmark part of their profit to help children in public schools.  During his birthdays, he requested his friends not to give him gifts but to sponsor learning programs. He cajoled me to overcome my shyness so that I can join his dinners where I was presented as Exhibit A to promote his advocacy. I found myself sitting beside Mr. James Wolfensohn, President of the Word Bank, President B. Aquino, the CEOs of top corporations, and even the beautiful people of Tatler, to talk about our education programs.

He was equally generous with his own resources.  Even without asking, he funded programs that reduced dropouts, trained teachers, transformed mayors to become education leaders, and helped parents to become more involved with schools.    He agreed to pose for billboards and advertisements on condition that his honoraria would finance programs in education.  He invested in many programs that answered the needs of schoolchildren– food, workbooks, training, and playgrounds.  When relief was withheld from Naga City because of politics, he gave Mayor Jesse Robredo  one million pesos so that school buildings can be rebuilt.

He gave children, their local leaders, parents, and teachers, the most precious gift of all— his presence.  He opened our education program in ARMM by personally going to Marbel in South Cotobato to preside over a meeting with mayors and barangay captains.  He gamely participated in a group dance with parents from Taguig in a rackety-rackety basketball court beside the railroad tracks.  He found it difficult to reconcile how poverty could rise side by side with opulence in BGC.  He walked with informal settlers from Intramuros.  By listening to them, he gave proof that men of power and wealth did genuinely care.  He looked so frail in our last education summit before his passing, but he walked up the stage to rally “his education agents” that their cause was great and sublime.

In all his greatness, Mr. SyCip was a model of humility and selflessness. Through his examples, he demonstrated that power and wealth are only valuable when they are used to empower those who have less I life.   He demanded no entitlement.  He queued up with all the others to wait for his turn.  He took no offence when ordinary people did not know his name.  He humbly extended his hand and said “I am Wash.”  He refused to be escorted to meetings.  He was uncomfortable every time I walked him to his car and said “you should be doing more important things”.

Mr. SyCip constantly accosted me for not spending more time for visioning and planning.  He said that as CEO of an organization, I should be empowering the staff and trusting them with operations. He made us learn accountability by demanding that targets be set to measure ROIs from our budgets.  He went beyond stories and anecdotes that dramatized our successes.  He demanded not just numbers, but outcomes.  How many children completed the school year?  How have reading and math scores increased?  How many grade one children completed grade six?

And he did not mince a word when we failed to meet our targets or prepare our reports on time.  And then, he would make up by giving us chocolates and things that caught his fancy.  During our first Synergeia Christmas, he distributed cash-gifts to the staff saying that we should never fail to appreciate their valuable contribution.

Mr. SyCip had great accomplishments and was sought by the high and mighty all over the world for his advice and wisdom.  But for me, the greatness of Mr. SyCip was in seeing with his heart, in loving the poor, and in many ways, being childlike.  He gave us the gifts of trust, faith, wonder, and devotion.