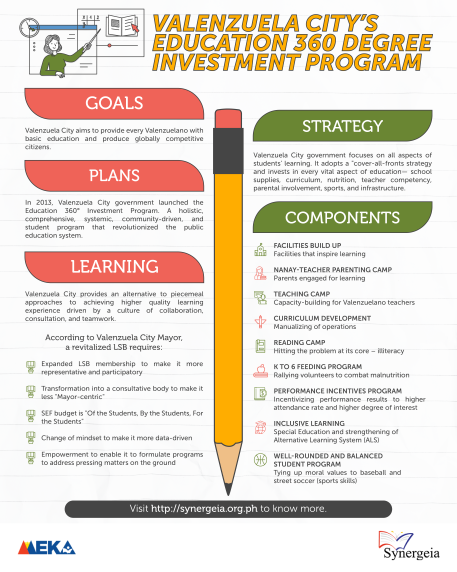 In the last 15 years, Valenzuela City has evolved from a laidback and nondescript town to a progressive and bustling city. It has developed into a major economic and industrial centre in the country. The growth and forward-looking stance of Valenzuela City can be attributed to its immediate past and current leadership.

Valenzuela is known as the city with innovative practices.  Leaders from all over the country have made it a favourite site for study tours or “lakbay-aral.”  The City’s significant reforms on governance encourage other cities and municipalities to replicate and organize similar programs.

Alongside economic progress, the City puts a premium in the quality education of the children from Valenzuela.  Typically, education is not within the wheelhouse of the local government and is often left under the Department of Education.

But Mayor Rex Gatchalian is out of the ordinary — taking on the trailblazing role of leading the implementation of the Valenzuela City’s Education 360° Investment Program.  Launched in 2013, the Education 360° Investment Program is a holistic, comprehensive, systemic, community-driven and student-centric program that revolutionized the public education system in Valenzuela City.

The City government focuses on all aspects of student’s learning.  It adopts a “cover-all-fronts” strategy and invests in every vital aspect of basic education – school supplies, curriculum, nutrition, teacher competency, parental involvement, sports and infrastructure.  Through deep community involvement, the program aims to provide every Valenzuelano with quality basic education and produce a globally competitive citizen.

The Education 360° Investment Program consists of the following components:

Empowerment starts with informing and listening to residents. The city government regularly conducts consultations with different sectors, school summits, and workshops with teachers and parents.  These are opportunities to discuss the state of education in the City: how many are in school, how many are dropping out, how many are performing well, and why children are under-performing.  The workshops turn into a listening session.  Residents, local leaders, parents and teachers share their dreams for the students and the realities that they face.  Their difficulties and inadequacies become the basis of programs that will be collaboratively undertaken by the community and will be funded by the SEF budget.  The Education 360° Investment Program was formulated through consultations, listening and participatory planning.

Citing Synergeia’s mantra of “Building a Constituency to Make Education Work,” Valenzuela City strengthened its LSB by expanding the composition of its membership through Executive Order 2019-324.

In addition to the LSB members mandated by the Local Government Code, the following are made part of the expanded LSB:

To streamline meetings and decision-making, the expanded membership of LSB was clustered into multiple technical working groups headed by action officers/project managers. This makes work faster and more efficient. There is no need to call the whole expanded LSB to discuss specific issues that do not concern everyone.

Forming LSB committees allow for a more even playing field, ensuring that everyone is able to contribute and make their voice heard. By giving members this kind of opportunity, discussions and meetings will not only be more productive but more value adding for the team as well.

The Mayor stressed that bite-size programs should be owned by smaller teams and action officers. By challenging people to take ownership of their work, he encourages them to make things happen. These teams are tasked to meet regularly and report back to the LSB.

This system does not only speed things up but also allows the teams to develop a level of expertise or specialization in the areas of ALS, sports, feeding and so forth.

The regular LSB meeting is set every third Friday of the month. But in reality, the board meets at least twice a month or more. Core group meetings are held regularly.  Project Managers convene regular committee meetings as well.

Dr. Meliton Zurbano, Schools Division Superintendent (SDS) of Valenzuela shared that he goes to the City Hall every week for meetings. He said in jest that he is more often seen at City Hall than in his office at DepEd

Mayor is Superintendent too

Mayor Rex epitomizes the new breed of leaders – restless, energetic and believing wholeheartedly that things can be done better and more efficiently.  He demands order in things. And he demands it from himself and from people around him.

His passion for education has moved him to directly takeover the transformation of education system in Valenzuela.  He took the helm in planning and implementing a program using a bottom-up approach.  Instead of piecemeal reforms, the city government embarked on a holistic approach that will strengthen all the processes which affect basic education.

Mayor Rex said, “The Education 360 Investment Program is systemic – this is its strongest selling point because we acknowledge that there are multiple dynamics at play. You need a lot of components to solve these problems.”

The Mayor is fondly called the “Other Superintendent.” He has a good picture of the current situation of education in the City, its performance successes, challenges and areas requiring attention.  He is always up with new ideas and confers with the LSB on how else to improve programs. His energy influences others to do their job and do it well.

He sees to it that every action is oriented towards improving the LSB’s ability to meet the needs of every Valenzuelano child.

School principals convene and carry out the improvement planning process. Principals determine areas that need to be prioritized based on their School Improvement Plans (SIPs).  The submitted proposals are consolidated and submitted to SDS for evaluation.

The proposed SEF budget prepared by the school level and city level are consolidated and submitted to the LSB Chair.

The annual budget calendar is prepared before the end of the year. It includes the plans of the LSB, budget estimates and indicative calendar for both division and city-initiated programs.

Action Officers and working groups of the Education 360 discuss, deliberate and evaluate the different programs. Any adjustments — enhancements, deletion/addition, scaling up or revision will be taken into consideration in the preparation of SEF budget.

Examples of adjustments include:

The proposed budget from the school level and Education 360 programs are consolidated and reviewed by Budget Officer before it is presented to the LSB.

The Budget Officer said that the project/activity estimates depend on the type of expenditure and number of beneficiaries, if applicable.

It is the City Treasurer who estimates how much SEF revenues can be budgeted by the LSB. The basis of estimates is the collection of the previous year plus an increment of ten percent (10%).

The LSB sets targets and performance indicators for the SEF budget for the year. According to SDS, the LSB uses the targets and indicators set by the DepEd.

Disagreements arise when the Mayor increases the targets higher than the standard indexes.

The preparation of the SEF budget is a collaborative effort of the following key players:

After thorough review, planning and evaluation of the proposed SEF budget, the LSB passes a resolution authorizing spending of the SEF and the Mayor gives his approval of the disbursements of the SEF budget.

The LSB follows the standard procurement process for services, goods, repair, maintenance and utilities. If amount is more than one million Pesos, it would go through the standard bidding procedure.

The Mayor stated that nothing is disbursed over the budget, and no expense is allowed to exceed beyond what has been allocated. The Budget officer ensures that prices are reasonable and competitive.

The SDS prepares a quarterly report which is submitted to DepEd Central.  The Budget Officer also submits a report to COA.

The LSB adheres to the principle of transparency and full-disclosure of budget spending. This information is posted on the official website of the City and transparency boards are located at three conspicuous places.

Valenzuela City gained recognition for its resourceful tax collection efforts and honest utilization of funds.  The City ranked first in Local Revenue Collection Efficiency in the National Capital Region (NCR) and second among all the cities nationwide for fiscal year 2017.  It also registered the highest sum in the Real Property Taxes (RPT) in the region in the same year.

When asked if the LSB engages in any activity to increase the SEF collection, Mayor Rex was quick to say “No.” He said the LSB only knows how to spend.

The Mayor stressed the importance of building the SEF through continued efficient tax collection alongside streamlining of spending.

What can we learn from Valenzuela’s LSB?

The most powerful lesson for Valenzuela may not only emerge on the strategies themselves but the processes through which they are created – a concerted process that puts welfare of the student at the centre.  In the face of piecemeal approaches to achieving higher quality learning experience, Valenzuela provides an alternative driven by a culture of collaboration, consultation and teamwork.

The Mayor cites what a revitalized LSB requires: