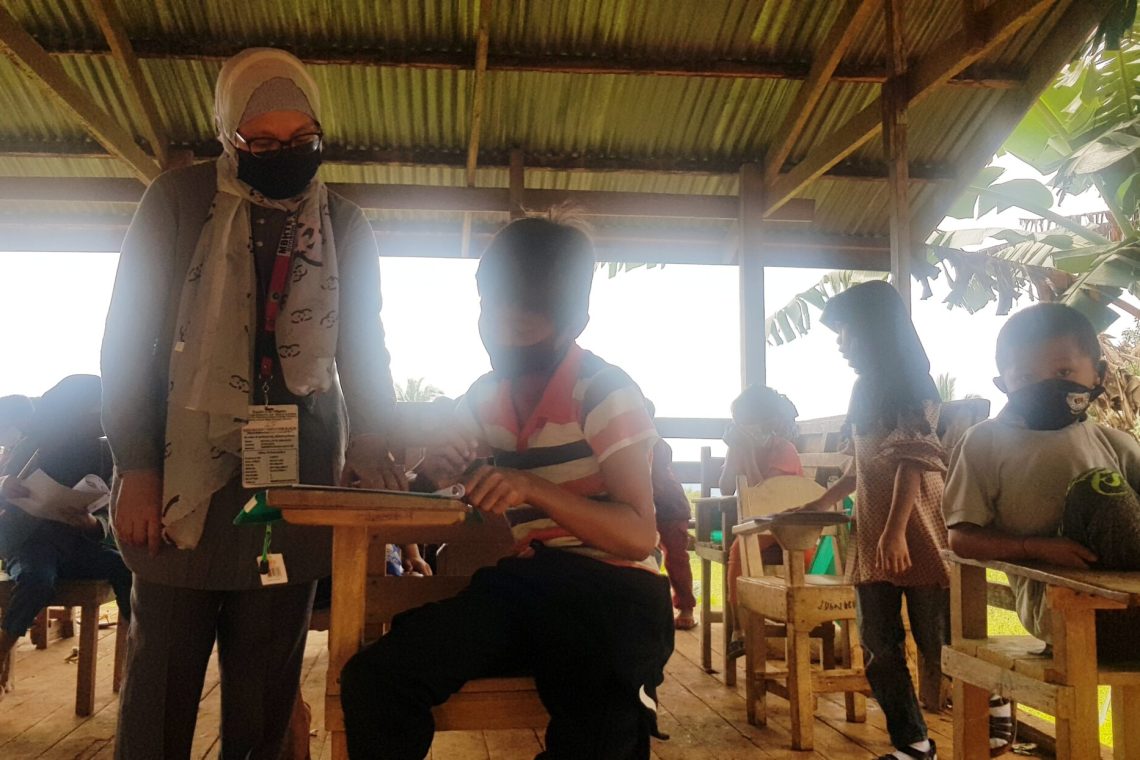 In a town in the Philippines’ southern Mindanao island, small groups of children – some of them sitting on empty sacks of rice spread out on the floor – are evenly divided among 10 volunteers as they sift through their learning modules while keeping a safe space from each other..

As the global pandemic shut schools and reshaped the learning system, volunteers – mostly in their 20s – are tutoring grade school kids in remote areas in Balindong town in Lanao del Sur province, helping them cope with the demands of distance learning..

In places like Balindong where phones are a luxury, Internet connectivity is erratic and most parents were unable to finish grade school, kids rely on these volunteers to survive the school year..

Once the norm, these in-person tutorials have become the exception in a country that, like many others around the world, has temporarily closed schools and moved learning to homes amid the Covid-19 pandemic. .

“Our motivation is to help those learners who are in need,” says Paypa Serad, a 36-year-old district school supervisor who launched the tutoring sessions she calls Siyap Ko Siringan” – a Maranao term that means “caring for your neighbor.”.

Serad began the morning tutorials in mid-October after recruiting her former high school students as tutors – college graduates and professionals who are doing it for free – to help young kids better understand the learning modules supplied by schools..

Before these teaching sessions, most children were struggling with school work with their own parents unable to mentor them, many of whom also spend the entire day working, she said..

Balindong currently has three active cases of Covid-19 and Serad and her volunteers usually pick Covid-free remote villages in the mountains where they sometimes cross small rivers to reach the communities, then holding learning sessions in makeshift shelters or open areas..

Among the joiners included a Grade 2 student who listened in while she cradled her baby sister in her arms; orphans, kids with either handmade masks or handkerchiefs – all excited for the day’s lessons saying they miss going to school..

“Our schedule starts at 9 am but some of the kids were there as early as 7 am. And when we finished, they asked, ‘ma’am when will you be back?” says Serad, who began her career as a volunteer teacher for two years..

In a recent learning session held at a rice mill, some members of the army stationed at a nearby detachment helped tutor the kids, Serad said._

Balindong is about 20 kilometres southwest of Marawi City, the capital of Lanao del Sur that was the site of a five-month battle between the military and Islamic militants in 2017, leaving the city in ruins..

Similar tutorials are being done in Maguindanao province where volunteers help children with their lessons, all wearing masks and a few feet away from each other, says Mayor Ramon Piang of North Upi, Maguindanao and head of the Central Mindanao Education Council..

Youth volunteers, mostly belonging to the Sangguniang Kabataan, also carry out tutorials in Cabatuan town in central Iloilo province, usually in barangay halls, chapels and basketball courts. An education degree holder from the town’s indigenous Ati tribe was hired by the local government to tutor students in their community..

“There should be no problem as long as the minimum health protocols are followed,” Cabatuan Mayor Ronilo Caspe told a recent virtual meeting with local counterparts from Mindanao and Senator Sherwin Gatchalian, facilitated by Synergeia Foundation..

“We’re doing this so the students won’t return the modules unanswered or worse, copy the answers from the answer key that comes with the modules.”.

Amidst the health crisis that has prompted the government to restrict movement among people and businesses since mid-March, the number of enrollees in Philippine schools dropped around 9 percent to 24.7 million this year, data from the Department of Education showed..

Synergeia, a non-profit organisation which has partnerships with international institutions like the United Nations and the Government of Japan (GOJ), Children’s Fund and the United States Agency for International Development (USAID), is pushing for every Filipino child to complete basic education in alliance with 426 local governments across the Philippines.

‘Adapt and be bold’.

Serad from Balindong says she got the idea for the tutorial sessions from a Synergeia-led seminar in September where the organisation proposed small learning hubs run by volunteers._

She said this can be replicated in many places in the country – where one in three poor households are headed by somebody who did not complete elementary education – facing similar challenges._

“I’m studying the possibility of recommending to the Department of Education to allow very limited face-to-face learning sessions in Covid-free communities,” he said, comparing the tutorials to the learning pods in the United States._

With many American schools also closing and shifting lessons online due to the pandemic, some parents have turned to learning pods or small, in-person groups of up to 10 students getting extra lessons from a tutor or teacher hired by the parents._

The town of Mangudadatu, also in Maguindanao, is looking at using a spacious gymnasium to hold tutorials for students whose parents are unable to mentor them, said Mayor Elizabeth Tayuan..

“It will be a waste of local government money printing the modules if they’re not backed by tutorials because the kids can’t get proper help from their parents,” she said..

The Department of Education could draw up rules allowing in-person tutorials in communities as long as they adhere to the minimum health protocols, said Mayor Piang of North Upi, with local chief executives ready to be answerable for any potential lapses..

“We need to adapt and maybe be bold in trying to influence policy by offering ourselves to be co-accountable,” Dominguez said.