BONGAO LOCAL SCHOOL BOARD – AN EPITOME OF EXCELLENCE 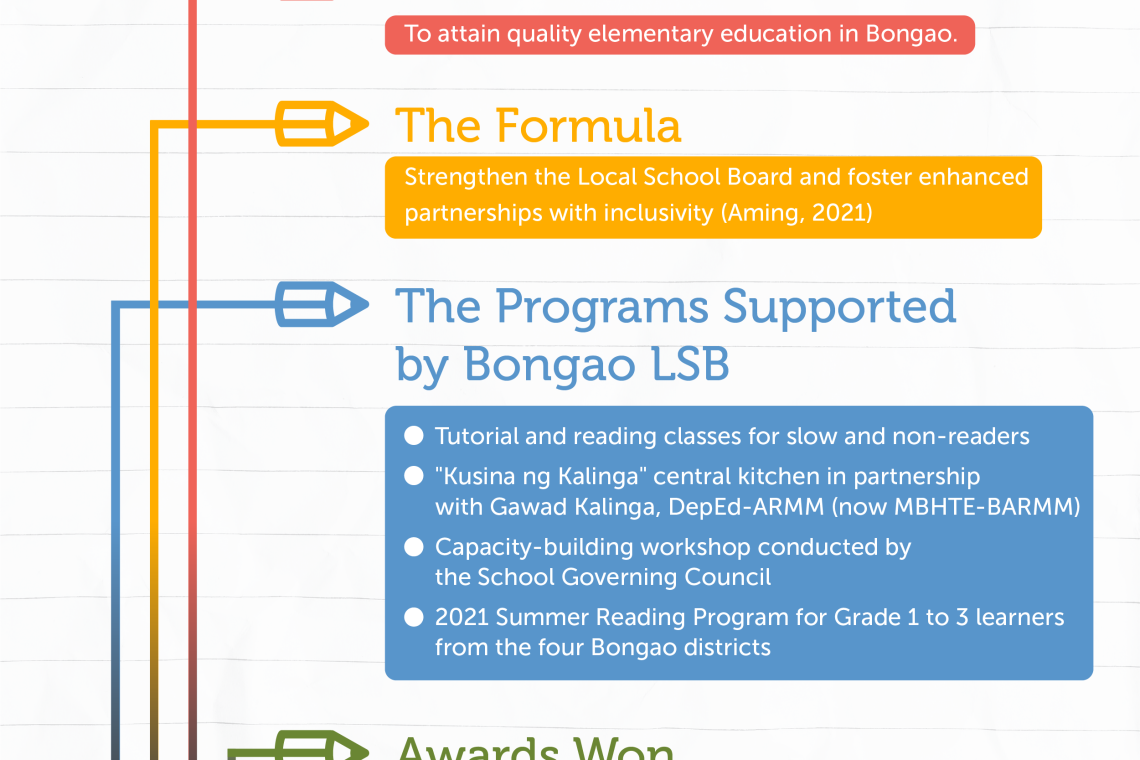 The government of Bongao believed that strengthening the Local School Board is crucial in addressing education issues as well as in achieving their vision to have a quality elementary education in Bongao.

With a stronger LSB, numerous campaigns and initiatives that involved the whole community of Bongao, and not just those in the academe, were pursued. These initiatives were introduced by the Bongao Local School Board under the administration of the late Hon. Mayor Albert T. Que, which were continued by former Mayor Jasper S. Que and now, by Mayor Jimuel Que.

To achieve their vision of having a quality elementary education in Bongao, the current Local School Board started with identifying the needs of the community and schools alike by asking the following questions:  What do the parents of the learners want from the schools that their children are attending? What do they expect from their children’s teachers? What are the current programs that need enhancement aside from tutorial classes and reading classes? Is the LSB doing enough? (Aming, 2021)

They asked the stakeholders such as District Supervisors, School Principals, Teachers, Parents, Community Organizations, partner agencies, Barangay Officials, and even the learners.  They tried to reach  communities in far-flung barangays of Bongao even if accessibility was difficult.  They were guided by the formula followed by the entire Bongao government: enhanced partnerships with inclusivity. (Aming, 2021) People in Bongao were informed of programs and exciting initiatives that could turn their children’s life around.  This resulted in the change in values and acceptance of people of progress in the community.

Bongao LSB became education-centered.  It sought partnerships such as with the Synergeia Foundation and the USAID Education Governance Effectiveness (EdGE) Program to avail of training programs to continuously improve the quality of basic education in the municipality.

To sustain its mission, Bongao LSB conducts monthly meetings to discuss project results and give immediate resolutions to pressing concerns. Monthly meetings became an avenue for regular updates on various education development projects and programs conducted.  Such projects and programs were centered on teachers’ trainings to enhance teachers’ capacity in effectively teaching the pupils; feeding programs for malnourished schoolchildren; PTA meetings for the establishment of community-parent-teacher relationships and the construction of school buildings to cater to more learners and for a more conducive learning environment.

Specifically, the Bonggao LSB initiated and supported the following programs to improve the education of their children:

Bongao LSB’s hardwork paid off when they received the award of the Seal of Good Education Governance awarded by Synergeia Foundation for 3 consecutive years from year 2017-2019. Indeed, Bongao’s Local School Board improved schoolchildren’s lives and generally the people’s lives as it made a huge difference on the people of Bongao.