“A Millenial Child Needs a Smart and Responsible Millenial Parent” 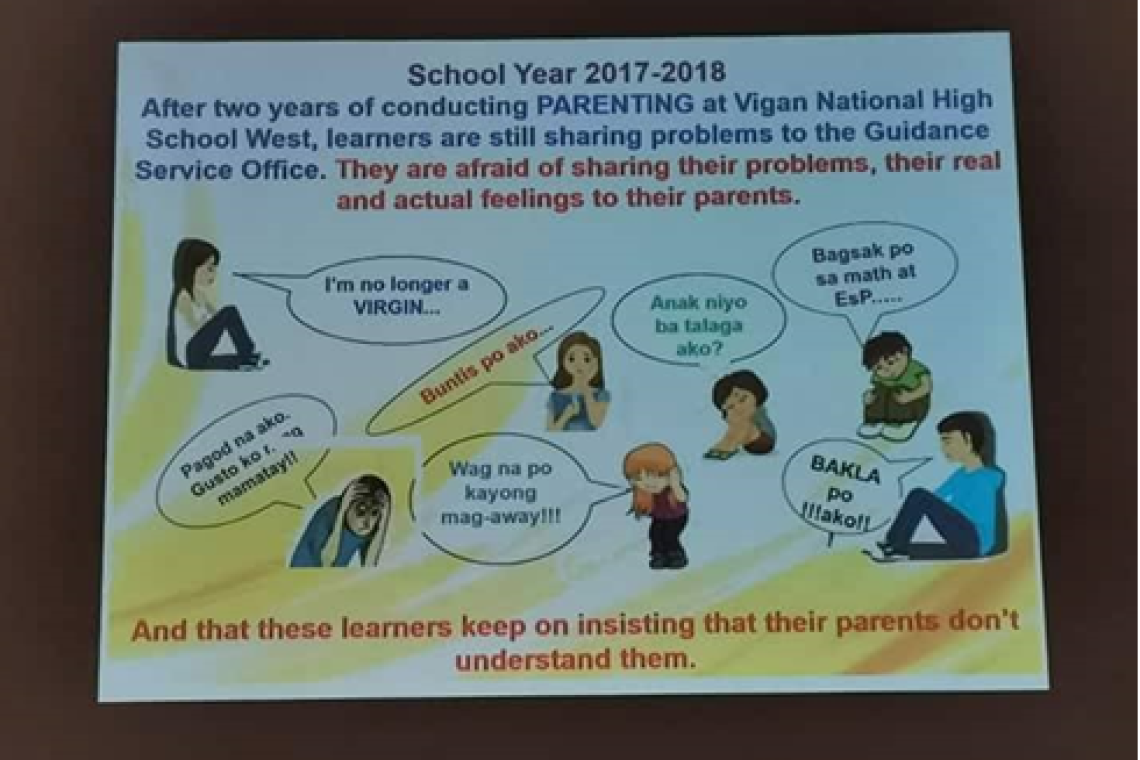 Meet Krisel Aquino.  Krisel is a student from Vigan National West High School who initiated a program to teach parents how to understand and support their children’s needs. Her story started back in 2016 when she won a recognition award for good academic performance.  Instead of receiving compliments for her award, her parents simply disregarded it, saying that the award would not do them any good because it could not put food on the table nor pay the bills. Krisel said that, unfortunately, this was the relationship she had with her parents.

Naturally, an experience like this would demoralize anybody, and Krisel was aware that there were many students just like her. She knew of fellow students who would say these things about their parents – – “ang napapansin lang ang pagkakamali ko,” “lagi silang busy,” “wala silang time sa akin,” “wala silang alam sa pinagdadaanan ko,” “lagi na lang silang nag-aaway,” “mahal ba nila talaga ako?” “buti na lang may mga kaibigang nakakaintindi sa akin,” “mapapansin lang siguro nila ako pag may mangyaring masama sa akin.”Krisel turned to her guidance counselor, Ms Wilmarie Teano, for help and together, they initiated the program they called “A Millenial Child Needs a Smart and Responsible Millenial Parent.” Through the program, Krisel hoped that parents would understand the situation of their children and the role they need to play in their education.

A series of activities was done, such as surveys, interviews, module development and planning, before rolling out the parenting training in her school.   The training module teaches positive parenting behavior and how to create an environment where children and parents can have a positive and healthy relationship with each other.  The training is designed to bridge the gap between the children and their parents.

At first, there were only a few attendees of the program but the numbers increased every year.   What started as a small local school program has now become an advocacy that has garnered the support of the SK, PNP, Barangay and the Municipality.   Parents’ training activities are now hosted in larger venues and in different barangays.  Ms. Teano proudly reported that absenteeism, drop-out cases and cases of failing or incomplete grades among the students have significantly decresed since they started the parenting program.  Because of the program, the school was awarded the most outstanding NGO in 2019 and 2020 by the city government of Vigan.

But a most important achievement of the program is something that is personal for Krisel.  After her parents’ participation in the program, they have become more involved in Krisel’s education.  She said that her father always asks if the things she needed in school are complete or they accompany her in school activities or when she receives an award.

Through Krisel’s spirit of community and camaraderie, she created a program to help herself and others like her.   Her hope is that the program continues to grow until every child has the supportive environment he or she deserves.