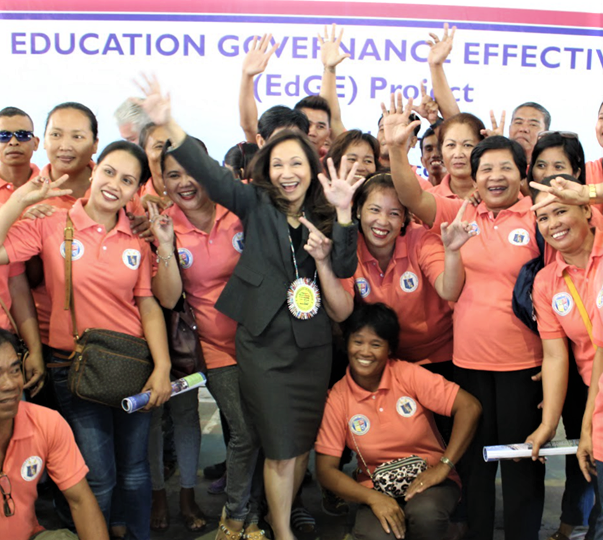 The acting administrator of the United States Agency for International Development, Gloria Steele, will be the keynote speaker at this week’s 14th Washington SyCip National Education Summit that will focus on how Filipino students can overcome learning challenges amidst the COVID-19 pandemic.

With a 40-year career at USAID, Steele, a Filipino-American, was appointed acting administrator by U.S. President Joe Biden shortly after he took office in January. A staunch education advocate, she launched the Education Governance Effectiveness (EdGE) program in 2013 when she was USAID’s mission director for the Philippines.

Under EdGE, Steele also introduced the Hugpong sa Pagbangon in Iloilo province in 2015, an education recovery assistance for communities affected by Typhoon Haiyan.

USAID implements its EdGE program in partnership with Synergeia Foundation. It is aimed at transforming local communities to be education champions, with the goal of improving the reading skills for at least one million early grade students.

With the theme “Learning from our Best to Defy Gravity”, the virtual summit on March 25-26 will show how the national and local governments can work more efficiently to help students across the country who have fallen behind their international counterparts based on recent global learning competency assessments.

The event will be streamed live on Synergeia’s Facebook page.

There will be panel discussions among education stakeholders including mayors, principals, teachers, parents and students on how they have transformed learning in their communities through participatory leadership, devoted parenting and committed teaching.

Education financing, a critical issue as the global health crisis prompted local governments to fund the production of millions of learning modules, will also be in focus.

The other highlight of the summit is the awarding of the Seal of Good Education Governance to cities and municipalities that have shown a marked improvement in education governance. Accomplishing that goal has become harder as the pandemic shut schools, forcing millions of students to learn remotely.

Synergeia, a nonprofit organization that transforms communities to improve the quality of basic education, has handed out 61 Seal of Good Education Governance since 2017, with nine local governments being recipients of the Seal for three years in a row.

Apart from the Seal, the winning local governments will receive prizes for their communities from PLDT Smart and Seaoil Foundation.