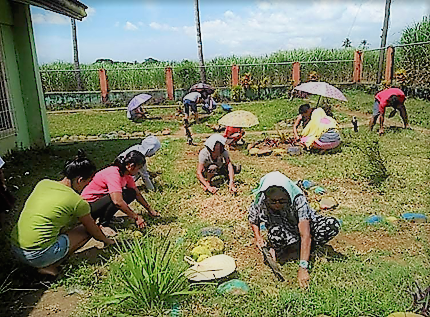 One has to navigate a long dirt road, amidst sugar plantations, avoiding boulders along the way, to reach Don Jose Gaston Memorial School in Victorias City, Negros Occidental.  Travel is harder during the rainy season when roads and canal merge as one.  To the tired and weary, the school’s well-kept grounds with concrete perimeter fence provide quite a pleasant sight.

Meet the School Head, Mr. Roberto Desin, Jr.   When he attended the USAID/ Synergeia workshop for School Governing Councils for the first time, he had doubts about being able to organize a SGC in his school.  He thought there were no potential members in the community with the capacity and resources to help the school.  He did not to lose hope and continued to look for stakeholders in the community.  After all, the primary requirement to become a member or officer of the SGC is commitment and the heart for the education of the children.  Resources will begin to pour in once a group of concerned stakeholders is organized and understand the importance of the SGC in responding to the needs of their own children in school.  It is important to let the community accept the fact that education is everybody’s concern.

Principal Desin was challenged to organize his own SGC after hearing good impressions from other schools with organized, active and functioning SGCs.  As members, he invited barangay officials, officers of the PTA, senior citizens, religious sector, hacienda overseers and Agrarian Reform Beneficiaries (ARBs) that make up most of the parents in school.  He gave the orientation on the role of the SGC in the school then proceeded with the election of officers. The first meeting was called to draft the constitution and by-laws and to define the roles and functions of its officers and embers.  The term of office of the officers was set for three years.  Since then, regular meetings have been conducted every month.  The officers are readily available when their services are needed in the school.

The elected chairperson was an elderly woman ARB.  She donated the initial fund of the SGC from her first harvest of sugar canes.  Within a short period, the SGC has been able to implement several projects in the school. They have a ‘Manihan sa Paaralan” project and planted peanuts in the school’s vacant lot.  The initial income they earned was used to purchase mesh wire for the grills of the H.E. and Grade 6 room doors.  They actively participate in school activities like the Brigada Eskwela and school exhibits.  They maintain the school vegetable garden which supplies their vegetable requirement of the daily feeding program.   They regularly clean the school premises to welcome school visitors.

The most common problem in the school is absenteeism. Some houses are far from the school.  Many pupils do not regularly go to school for various reasons.  To address the problem, the SGC proposed a school policy that if a pupil incurred two consecutive absences, the concerned parent shall called for a meeting at the Principal’s Office. This school policy was adopted by the barangay and it is now an ordinance. If the cause of absence was the parent’s responsibility, the SGC, with the School Head’s approval, will endorse it to the barangay.   The barangay may ask the parent to render community service in the school.  Because of this policy and ordinance, absences have been drastically reduced.

Principal Desin has proven that an active and functioning SGC does not really require having the rich and famous in the community as officers and members.  Ordinary farmers like Agrarian Reform Beneficiaries who are “small planters” with the commitment to serve can make the difference.