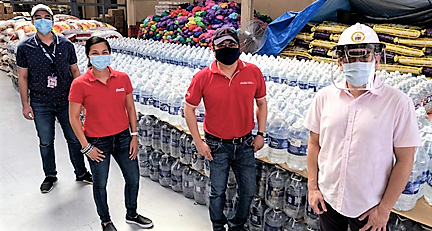 We helped coordinate the effort with local governments, barangay and parent leaders and organized a data base.  We assisted in the actual distribution of the gift packs in the following LGUs:  Pasig; Quezon City, Caloocan City, Navotas City, San Fernando in Pampanga, Muntinlupa, Malabon, Iloilo, Obando in Bulacan, Corella in Bohol, and Argao, Dalaguete and Consolacion in Cebu.

Happiness was painted in the faces of families as they received their gift packs.  Uno, a special child from Muntinlupa, was our very special recipient of the Coca-Cola gift pack.  He flashed his cutest smile when he received his gift pack together with his mother.   The Local Chief Executives were very thankful and lent their presence to express their gratitude for the generous donation.  Mayor Len Oreta led the organization of the relief program in Malabon.  Mayor Vico Sotto and Congressman Roman Romulo were on top of the distribution of gift packs in Pasig.