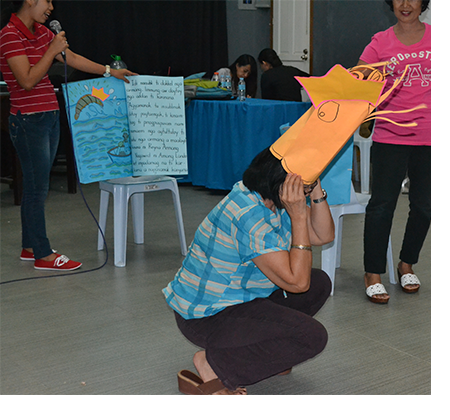 The local government of the municipality of Luna, La Union has reason to be proud. The local school board’s (LSB) initiative to train its teachers in October 2014 resulted into the future publication and distribution of an original story made by five teachers to benefit children nationwide.

According to Luna Mayor Victor Marron, the success was the result of attending the LSB workshop conducted by Synergeia Foundation under USAID’s Education Governance Effectiveness (EdGE) in October 2013. This was when he learned that effective education programs need not require big funds. “We started to think of projects that will have the biggest impact in enhancing children’s learning abilities on a limited budget,” he relates.

“Students have difficulty coping in high school because they did not develop the enthusiasm for reading in their early years,” Mayor  Marron says.

Mayor Marron determined that enhancing the instructional skills of Grade 1 teachers would help children form good reading habits that will sustain their educational growth. “Students have difficulty coping in high school because they did not develop the enthusiasm for reading in their early years,” he says.

On October 10-12, 2014, the LSB initiated the training of twenty Grade 1 teachers on storytelling, story-writing for young learners and big-book making with a complimentary training on English pronunciation and soft skills through The Storytelling Project (TSP) and EdGE partner/implementor Synergeia Foundation.

During the training, a group of five teachers came up with an original story titled “Ti Dakkel Nga Armang” (The Big Krill). Armang (krill) or alamang in Filipino is abundant in the fishing village of coastal Rimos no. 4 in Luna where the teachers are posted. The fictional story depicts real life in a fishing village. The mythical story incorporates good values and love for the environment that children can easily relate to. TSP founder Rey Bufi, reportedly, was so impressed by the story that he offered to publish it commercially for distribution in Fully Booked bookstore outlets. On Dec. 28, 2014, Bufi worked with the teachers to improve the story and translate it in Filipino in preparation for its official publication as an illustrated big book. It will be distributed within early 2015 with full support from Luna’s LGU.

“The teachers said the training was so different from others they had in the past,” Mayor Marron shares. Inspired by the success, he initiated a roll-out training to day-care teachers on Dec. 27-29, 2014. He expects that through this effort, Luna children will gain the love for reading in their formative years to sustain their education in the long term.

Teachers from a fishing village in Luna, La Union relate the original story they conceptualized through visual presentation during the LSB-initiated training.

The biggest challenge for Felomina Taplin, Teacher-In-Charge at Besong-Saddle Primary School in the municipality of Tuba, Benguet, was to raise the performance of her pupils by providing a more conducive learning environment for them. The school governance workshop conducted by Synergeia Foundation under USAID’s Education Governance Effectiveness (EdGE) program taught her to engage the community to help with the task and how to do it effectively.

Taplin’s school was unpaved and surrounded by dirt such that children were not allowed to venture out during breaks, especially when it rained and the soil became muddy. “The children got bored and it affected their enthusiasm during class,” she relates. Taplin or Ma’am Fely had been a classroom teacher until she was given charge of the entire school comprising mostly indigenous children from the agriculturally-dependent municipality. “I suddenly had to do everything. This is why the training came at such a good time,” Ma’am Fely says.

During the EdGE workshop held on January 27-29, 2014 in Baguio City, Ma’am Fely learned that solving tasks a step at a time moves one closer to achieving bigger goals. She considered all the possible reasons that affect her pupils’ learning abilities and decided that many of the bigger problems could not be solved on the short term. The dirt-filled surroundings that dampen children’s mood could possibly be addressed right away.  However, she realized she could not do it alone. She learned from EdGE that presenting a systematic plan to the community would gain her the support needed for the project. “I was able to utilize my learning from the seminar on how to gain the support of stakeholders in implementing projects,” she says.

“There will always be problems but knowing that there are people willing to help motivates us to do our best,” says Felomina Taplin.

She called a meeting with the PTA and involved concerned citizens even if they are not parents. She approached potential donors and called for volunteers by posting on community billboards and waiting sheds. “They all came,” Taplin enthusiastically said over the phone when she reported the activity. Many volunteers, men and women, parents and non-parents alike, offered to provide labor. Even children came to help in their own way. Private donors sponsored materials and food for the laborers. The community worked on the project together for four days on Oct. 28, Nov. 4-6, 2014.

Now that the children are much more inclined to focus on their studies after the significant improvement on their school, Ma’am Fely’s next task is to make sure it translates to better learning outcomes. “There will always be problems but knowing that there are people willing to help motivates us to do our best,” says Ma’am Fely.

Besong-Saddle Primary School before and after the community’s paving project headed by Ms. Felomina Taplin.