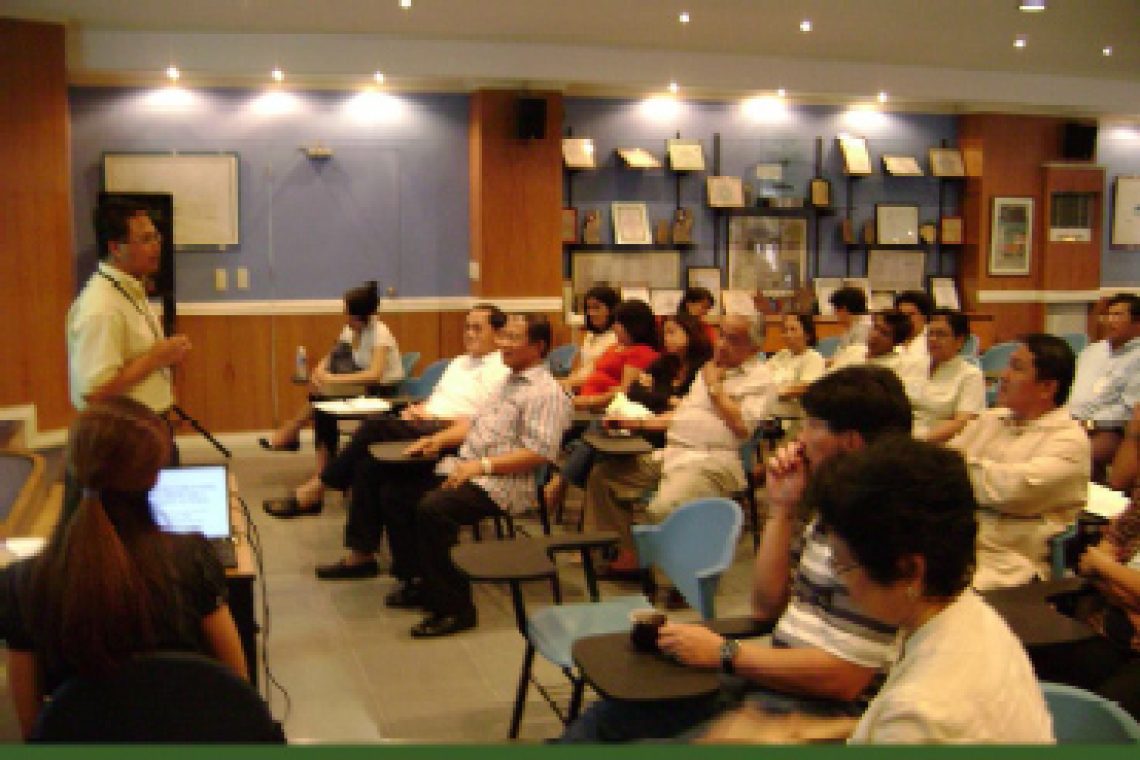 In July 2007, San Roque Power Corporation, Synergeia Foundation and the Municipal Governments of San Manuel and San Nicolas in Pangasinan and Itogon, Benguet entered into a partnership to enable 3,344 grade one students in 89 elementary schools to read, write and understand English1. These basic skills are critical in developing the comprehension, communication, and thinking capabilities of children.

The San Roque Education Governance Program builds the capacity of parents, school officials, teachers, local school board officials and community leaders to actively participate in improving the processes that will make children learn better. These processes include performance assessment of students, collaborative planning through summits, teacher training, organization of parent support groups, development of instructional materials, and reinvention of the local school board.

A signing ceremony was held at the SGV Board room led by San Roque President and CEO Mr. Riyukichi Kawaguchi and Synergeia Trustee, Mr. Washington SyCip. The partnership was made possible through the efforts of San Roque Vice President Mr. Tommy T. Valdez, who learned about Synergeia in an AIM forum.

Indeed, the assistance of San Roque to the communities of San Manuel, San Nicolas and Itogon has gone a long way. Even with less than a year of implementation, program interventions such as training of Grade One teachers, providing children’s workbooks and teachers’ manuals, training of parent-leaders, and empowering the Local School Board have contributed to much improved and better student performance by the end of school year 2007-2008.

To engage different stakeholders in  the program, a multi-sectoral Project Management Team (PMT) was organized in each municipality in July. The PMT is headed by the Municipal Mayor and is comprised of the education stakeholders in the community – namely DepEd Supervisors, PTCA federation officers, grade one teacher-leaders, principal-leaders, and other municipal officials such as the Treasurer, Planning Officer and Budget Officer.

A representative from San Roque Power Corporation, in the person of Ms. Mina Evanoso, IEC and Special Projects Coordinator, also sits as a member of the organized PMTs. Ms. Evanoso coordinates the initiatives of the three PMTs with support from Synergeia.

The main role of the PMT is to handle the implementation of a community-owned education reform program. It mobilizes and empowers constituents to be active partners in the project. It should not only have the capacity to lead but also the passion and dedication to ensure lasting reforms.

To support the PMTs in their new mission, Synergeia organized a joint PMT Training Workshop on July 23, 2007 at the San Roque Dam. The PMTs of San Manuel, San Nicolas and Itogon were joined by the PMTs of Natividad and Sta. Barbara, two municipalities in Pangasinan which are also implementing Synergeia reading programs.

The workshop opened with a presentation on how the children are performing in the target  municipalities. Synergeia CEO Dr. Milwida M. Guevara presented the scores of Pangasinan children from the 2007 National Achievement Test (NAT). Even with 6 years of elementary schooling, students from Pangasinan have only developed 6 out of 10 learning competencies in English. Children from San Manuel achieved an average score of 63.67% in the English NAT, while San Nicolas and Itogon scored 62.75% and 66.05% respectively.

A closer look at the scores per municipality showed that apart from lack skills mastery, there is performance inequity among children in schools. Highest achievers can answer 9 out 10 questions correctly in English while lowest performers can only answer 3 out of 10 questions correctly. The biggest disparity can be seen in the San Manuel test results. At the open forum, mayors shared their shock at the test results. Mayor Salvador Perez of San Manuel expressed that this was the first time that the test results were explained to him. Up until that moment, he did not realize that there was a crisis in education in his municipality. Other participants in the workshop shared his sentiment. Mayor Alfonso Gamboa of E.B. Magalona, Negros Occidental shared that he was in the same position as Mayor Perez before he started the education reform program in his town. He said that children in Pangasinan are better off. At the time when Mayor Gamboa requested for the NAT results, children from his town were performing at 49.53%. This was a wake-up call for the whole community of E.B. Magalona.

As the local chief executive (LCE), Mayor Gamboa shared that he felt that the local government unit (LGU) must take the lead in pushing for improvements in the quality of education in its schools. He worked closely with DepEd and they conducted a thorough survey of schools, teachers and pupils. By involving other sectors in the community, such as parents, Sangguniang Kabataan and barangays, E.B. Magalona was able to raise resources to train teachers, produce workbooks and lesson plans, and conduct feeding programs and remedial reading programs. Mayor Gamboa was happy to share that his town was able to raise average achievement test scores to 62% in three years.

Former Nueva Vizcaya Governor Rodolfo Agbayani, another Synergeia champion LCE, also shared his province’s experience in improving the quality of education in its day care centers and public schools. By engaging parents and barangay officials, the province was able to raise reading scores from 62% to 78%.

After a brief open forum, participants discussed as a PMT the issues in education which concern them the most and how they will work together toward addressing these issues.

Many issues were presented but the three San Roque towns were in agreement on four main concerns:

Each municipality shared their suggested programs and strategies to address these concerns.