Discovering the power to change 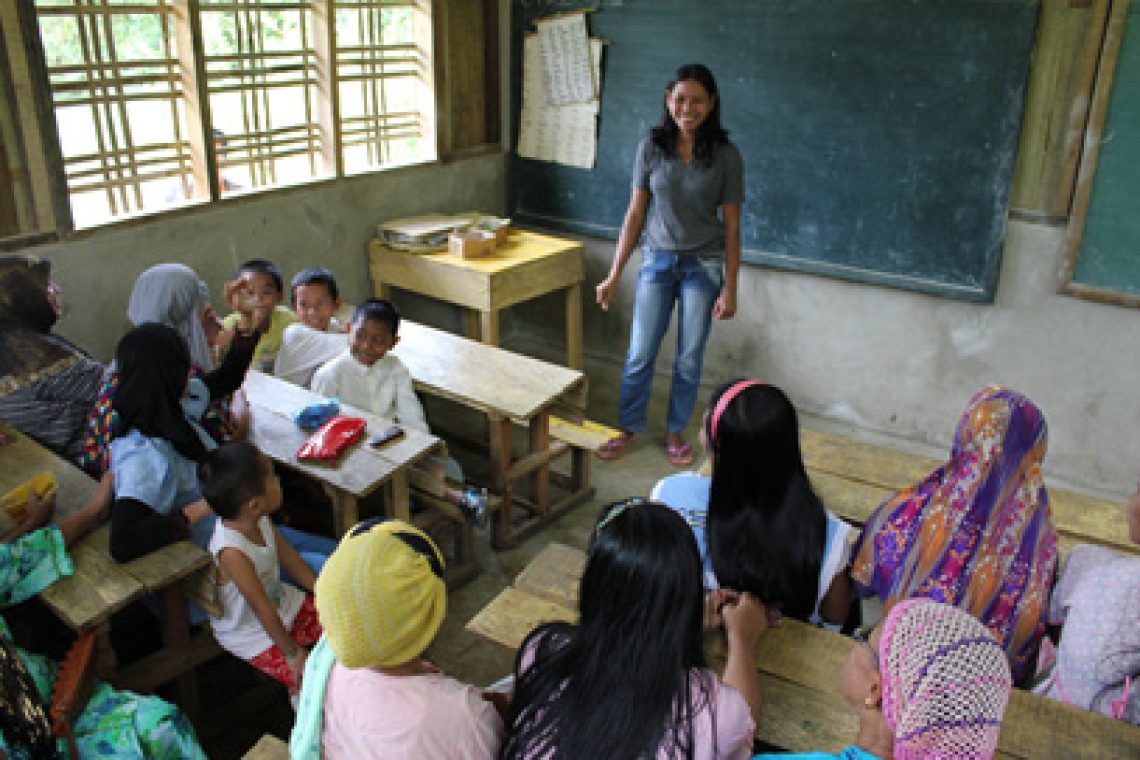 For years, teachers and parents in this small school in a remote village in Sulu, the Philippines’ southernmost island, have been witness to perennial problems that have stunted their children’s learning.

Rainy days meant poor attendance at school. Books and visual aids – very precious items in these parts – could not be kept inside the classrooms lest they get damaged due to exposure to the elements. And children don’t look forward to staying for hours inside a small open hut with nipa roof and beaten-down desks.

“Our school used to be a wooden hut without walls. Since it was open, our kids easily get wet when it rained,” says Nurhaina Jalilul, whose children are enrolled in the school. One child is in Grade 1 and another in Grade 3.

Since the primary school was reopened in 1991 – after a decades-long closure that started during the ‘70s Martial Law era – the school received very little help, even for the construction of a more permanent structure to house the pupils.

Everything would have remained the same for children passing through this small school. But Siundoh’s parents would not give up.

Elected for a three-year term starting in 2009, officers of the school’s Parents’-Teachers’ Association realized that to improve their children’s condition in school, waiting for assistance was not a viable option. They knew that they had to play a bigger role than just attending quarterly meetings. And if somebody were to build classrooms for their children, it would have to be them.

In February 2010, the group secured a $1,000 (or roughly P47,000) Community Incentive Grant from the Education Quality and Access to Learning and Livelihood Skills (EQuALLS2) Project, a joint undertaking between the USAID and the Philippine government. The Siundoh PTA was the first in Sulu to receive the grant from the project.

Under the program, PTAs and public schools are given funds to plan and execute projects that address the needs of school children as well as out-of-school youth in a particular community.

“After some of our officers attended a seminar conducted by the Synergiea Foundation in Zamboanga City, we immediately organized a meeting among our officers and members. There, we decided to take on the opportunity offered by the Foundation for us to obtain funding to make our school better,” Muhammadsan Hadjula, PTA secretary, shares.

The seminar taught PTA officers and public school administrators ways to get funding for projects. More importantly, the seminar ingrained the importance of parents and school officials’ ownership of such school projects.

The grant is not a dole-out. PTAs must play an active role in every step of the project—from planning, writing the proposal, project management, budgeting, to project monitoring and evaluation—just to get a single centavo. PTA officers and school officials were given instructions on these steps during trainings conducted by Synergeia Foundation.

“We (PTA officers) sat together and made a proposal, and then we asked our teacher here in the school to check our work. On the same day, completed our grant proposal,” Jalilul says.

“We submitted the proposal around mid-February and we got the approval before the month ended. We were the first PTA in Sulu to have been awarded the grant,” she proudly adds.

For the group, it was clear where the money was going: build a better classroom where their children can learn their letters and numbers well – even during rainy days. The $1,000 grant was intended to renovate the existing school structure.

Barangay officials in Siundoh offered counterpart funding to upgrade the work – from simple renovation to total demolition of the old structure and rebuilding a new one-classroom school building.

“Our barangay gave a counterpart funding. Whatever construction materials that was needed after we used up the grant, the barangay provided. Our parents also came to build the classroom, mostly as volunteers,” Jalilul says.

For her part, Hadjula says: “In our proposal, we scheduled one month for the construction. But we completed the project in two weeks. At least 10 workers would show up everyday – even during weekends – and most of them are parents who volunteered to work as carpenters. And our barangay captain even stood as the chief carpenter.”

Today, attendance is the least of the teachers’ concerns in Siundoh. Children are now excited to come to school. Parents have less worry on days when it rains. The classroom project changed the community’s mentality that nothing can be done to alleviate these children’s plight.

The community of Siundoh has come to realize its power to change things with its own hands. The small community can now afford to dream.

“We hope that we can do more projects like this so we can build more classrooms for our children. So that from a primary school that teaches our children only until Grade 3, we can build here an elementary school so that our children would not have to walk three kilometers to the nearest school,” says Jalilul.

So far, the EQuALLS2 Project has completed 117 CIG projects in Maguindanao and Lanao del Sur. Twenty-five are still ongoing, bringing the total to 142. Assistance from USAID has reached P6.674 million, but counterpart funding from communities reached P4.55 million. In Sulu, there are 93 in various stages made possible by P4.935 million assistance from EQ2. Counterpart funding in the province chalked up to P449,287, both areas illustrating how communities have discovered and embraced their power to change their own future.