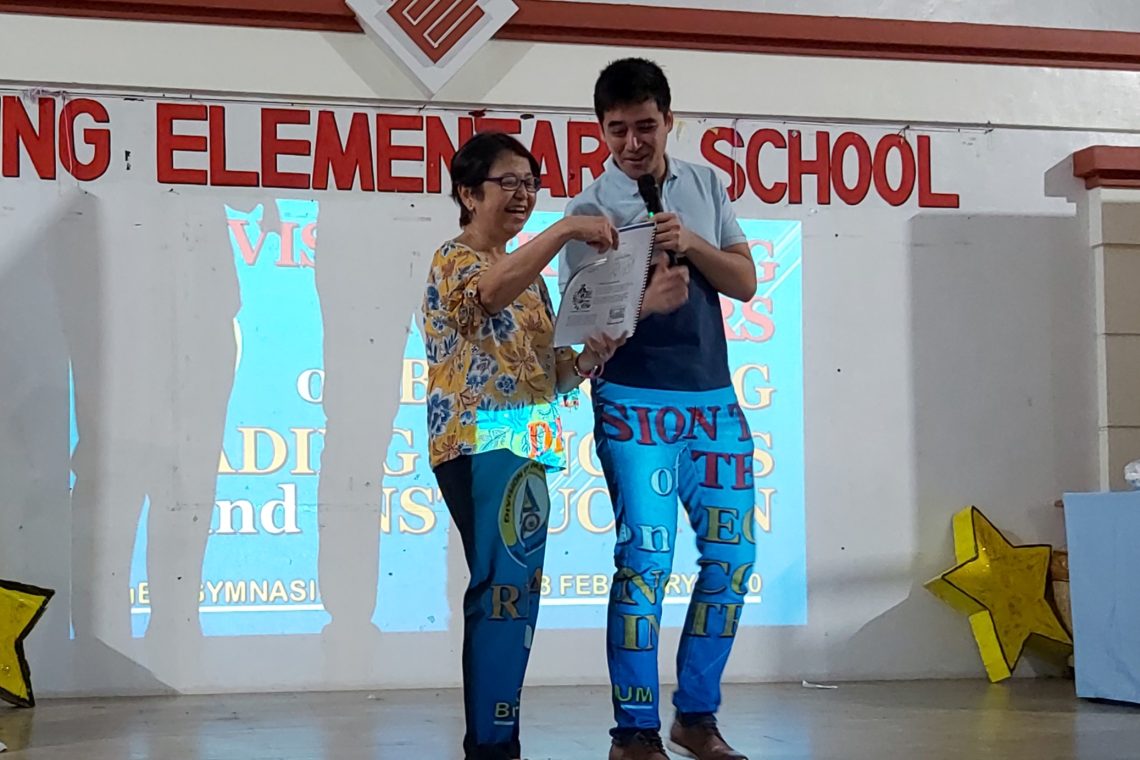 A marathon relay is no match to the line-up of activities that Synergeia had in Pasig City early into 2020. Mayor Vico Sotto had given the baton over to his beloved professor, Synergeia President and CEO Dr. Nene Guevara, in overseeing their education governance programs. Together with Dr. Evalou Agustin, DepEd School Division Superintendent, a series of capacity building programs deemed important for the schools was planned.  It was one jam-packed calendar but all the weariness from the preparation of these activities melted away after witnessing the positive response from the participants.  And to give a glimpse of these activities, here is a timeline of what had happened in Pasig City:

A prelude to the teachers’ training, Synergeia conducted a teacher-leaders workshop for more than 20 teachers, hand-picked by the English coordinator for Pasig. They were prepared for a mission: impossible – – to serve as co-facilitators in the remedial reading workshop for more than 1,400 teachers.  The teachers seized the challenge as they took their roles seriously and initiated their own practice sessions before the start of the actual workshops.  These teacher-leaders took charge of doing the various exercises on phonemes and comprehension with the “teacher-trainees.”

In order to make education work, stakeholders in the community should be engaged in the programs initiated by the LGU.  As with other SGC workshops facilitated by Synergeia, invited to the SGC workshop were the barangay chairmen, PTA president and school heads who are the key officers in their respective schools.  They reviewed the important components of the SGC such as its functions, difference from the PTA, responsibilities of members, election of officers, and doing a stakeholders mapping.  Because getting the organization to work together is difficult at the beginning, they had an exercise on team building.  They also had a session on organizing a meeting wherein some participants did interesting illustrations to describe an orderly and a disorderly meeting.  In their sharing, a meeting is “maayos” (orderly) if it has a goal/objective, an agenda, a leader or facilitator, if it is participative, and consensus building.  A meeting that is “magulo” (ineffective) is just the opposite of these.

The main output of the SGC workshop is an action plan for each school. To prepare for this, participants learned to translate goals into tasks, the difference between inputs and outputs, and the importance of thinking in terms of outcomes. As their first foray in action planning, many schools focused on reorganizing their SGCs as a result of what they learned in the workshop.

Teachers’ Workshop on Basic Reading Instruction, All Saturdays of February

This series of workshops was the most challenging among all activities for Pasig City just by the sheer number of teachers who attended – between 360 to 400 teachers per batch.  But the excitement, the energy and the openness to learn new ways to effectively teach reading to children kept everybody going.

Dr. Guevara taught the teachers with her usual gusto and wit.  The workshops were as usual interactive and fun while teachers reviewed the basic components of reading. Helping Dr. Guevara were Mr. Joey Calios, Education Program Supervisor from the Division Office, and Synergeia mentors Mr. Joaquin Hagedorn and Mr. Oskar Atendido.

In all the four Saturdays, the city’s top local officials came to show their support to the teachers’ training and to talk about efforts to improve the delivery of education not only in Pasig but the whole country.    Congressman Roman Romulo took the opportunity to explain the return of the GMRC subject in schools and changes to the K-to-12 law that are being discussed in Congress like the suspension of the mother tongue-based curriculum.

Mayor Vico Sotto graced the capacity building workshops with his stellar presence.  He rallied everyone’s support for the education programs that Pasig is launching, including a series of teacher training to address poor reading skills of children. He praised the teachers on their dedication to their profession.  Of course, as his former professor, Dr. Guevara did not let the chance pass for the Mayor to do some reading exercises.  It was teaching and learning by example, and Pasig’s rock star Mayor gamely read some nursery rhymes before the delighted teachers.