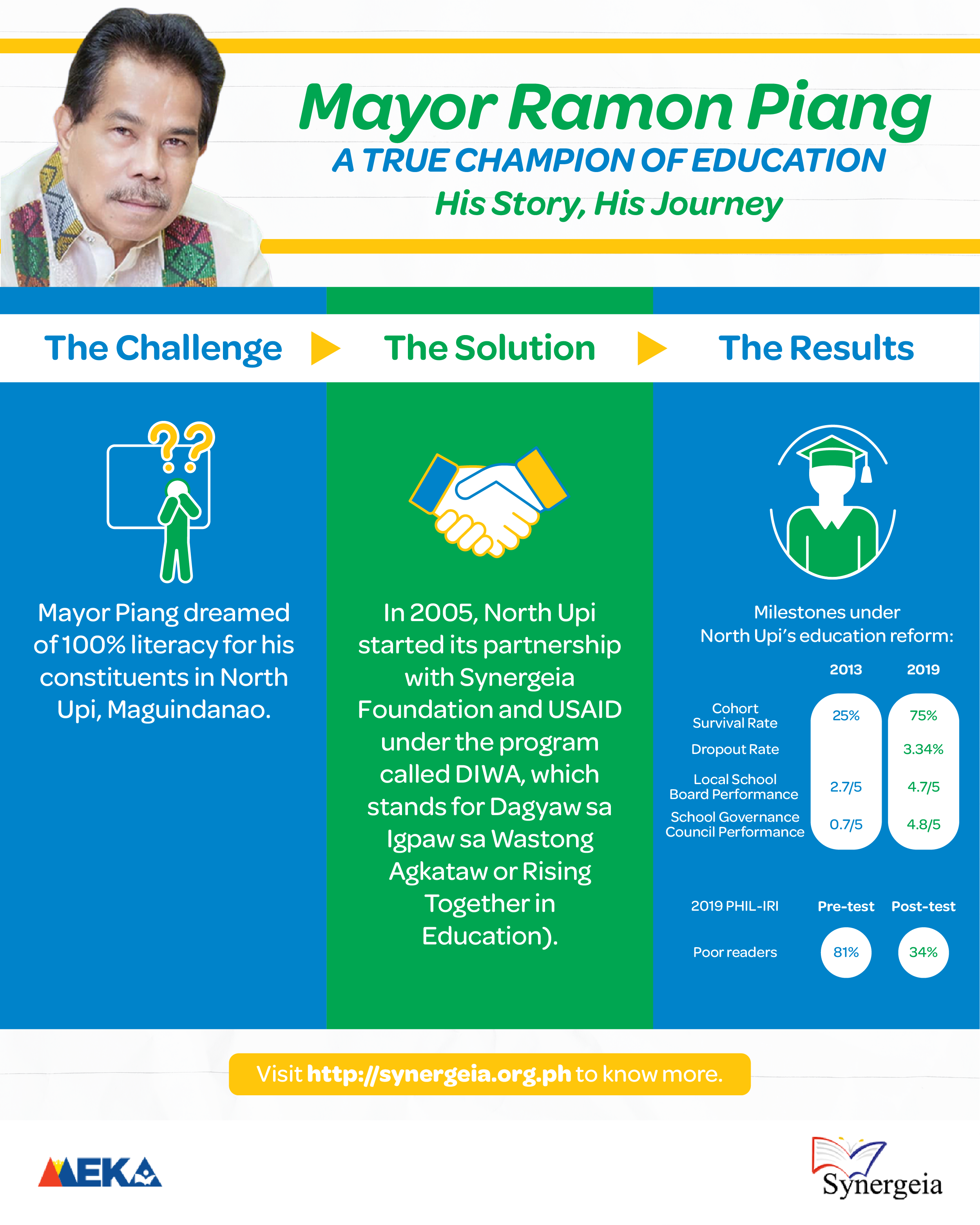 His Journey, His Story

Mayor Ramon Piang was once a school principal before he became mayor of North Upi, Maguindanao, in 2001.  Given his professional background, education has always been his top priority.  And he dreams big:  100% literacy for his constituents.

North Upi started its partnership with the USAID and Synergeia under the program called “DIWA” (Dagyaw sa Igpaw sa Wastong Agkataw or Rising Together in Education).  US Ambassador Francis Ricciardoni, Secretary Jesli Lapus of the Department of Education, Synergeia Foundation trustees and partner governors mayors from all over the Philippines launched the program in Nuro, Upi. Tha was in 2005.  After 15 years, so much progress has happened in North Upi.  Mayor Piang was proud to make his state of education report last February before some 200 education stakeholders and partners of Upi.  It was symbolic that Mayor Piang gave his address in the same gymnasium where the first program was launched in 2005.  The gymnasium has changed and become modern with a digital video wall in the center of the stage and the activity was broadcast live in the LGU’s radio station DXUP and cable TV network.  Much like the great strides of North Upi in its education program:

Mayor Piang once recalled how school administrators used to come to him to request for funds for a fieldtrip or a jamboree.  Now, they ask the Mayor to support the students’ review for the NAT.  “Mayor, pwede po ba tayong magreview para sa susunod na NAT exams?”  He is very pleased that all sectors, including parents, the business sector, civil society and of course, the teachers and supervisors are all actively involved in the LGU’s endeavour to provide quality education to its youth.  Times have indeed changed for the better in North Upi.

It is noteworthy to mention that, over the years and in the course of his incumbency for various terms as Mayor of North Upi, Mayor Piang garnered for his town and for himself the following awards and citations:

Most importantly and of greatest significance is the fact that under his incumbency, North Upi grew from a 4th class municipality with an annual income of less than P50 million to a 1st class town with an annual budget of P130 million, a feat which he attributes to the trust, confidence and whole hearted participation of his constituents in the municipality.