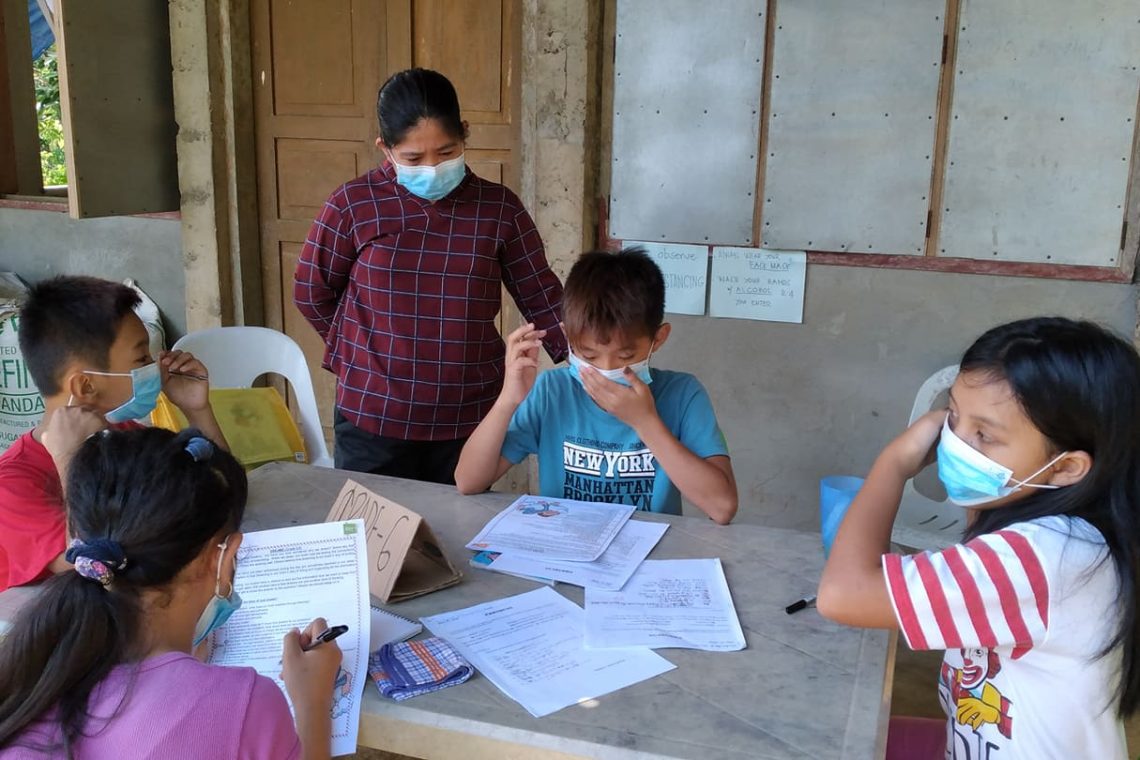 With five children, a single mobile phone and a WiFi connection courtesy of her neighbor, Joyless Presado is undaunted by the challenges of distance learning, the new education model that’s added teacher to a parent’s multiple hats.

“Because they can’t go to school due to the pandemic, children should understand that there’s always a solution,” says the 38-year old mother from Valenzuela City, north of the Philippine capital Manila. “This is what I tell my kids so they’re excited even if it’s online learning because they want to learn.

“You can’t be too negative because education should continue,” said Presado, who admits her name is a misnomer. “I’m joyful by heart.”

In Pandan in the province of Antique in central Philippines, Richard Suñega, a father of three, picks up his neighbour’s kids during the day and teaches them along with his own. “We should focus on the youth today because they need to continue learning and I support that,” he said.

As the coronavirus pandemic shuttered schools and relocated learning to homes, parents have now taken on the role of educators, guiding their children through learning modules given by schools and online classes.

Synergeia Foundation, a non-profit organisation targeting to lift the quality of basic education, partnered with local governments and the Department of Education, and from August began virtual workshops with parents in various cities and towns across the Philippines to help them cope with their new task as teachers.

Synergeia’s Nanay-Tatay Teacher campaign, with workshops done via Zoom video conferencing and broadcast on Facebook, where Presado and Suñega shared some of their experiences, aims to arm parents with the right mindset in schooling their children.

“The first role of a teacher is to provide inspiration,” says Synergeia Chief Executive Officer and President Milwida Guevara, who leads the workshops with Synergeia Vice Chairman Dr. Antonio Torralba.

“If your child is inspired, he understands the importance of education and you’ll only need to do little to discipline him,” says Guevara.

Guevara, who was Finance Undersecretary for nearly a decade through 2000, said it is important to focus on three essential learning competencies – reading, mathematics and character education – at this time when the conventional school system is not available and the burden of teaching students lies with their own parents, many of them already stretched thin by their jobs.

That is a learning that 40-year-old Ana Vi Conadera tries to put to heart as she guides her Grade 7 son through 11 school modules covering different subjects.

Conadera, from Talisay City in central Negros Occidental province, picked up the modules herself when public schools launched classes on Oct. 5. They need to be returned the following week when she’ll get fresh modules.

Internet speed in the Philippines is among the slowest in the world, ranking 106th in terms of fixed broadband and 120th for mobile based on Ookla’s Speedtest Global Index in August.

With Internet availability slow, costly or scarce in many areas, most public schools are supplying learning materials or modules to students, putting parents in charge of teaching them to their kids.

“It’s difficult so I’ve asked my sister to help out,” said Conadera, on how she deals with helping her son, Andrew, with his lessons.

She’s a solo parent to Andrew and eight-year old Reana who starts getting her own modules a week later, and can only help out when she finishes work in the local barangay office mid-afternoon after a busy morning cooking meals she sells through her sister’s store.

“I try not to exert too much pressure on him since classes have just begun. But I remind him to read through his lessons again and again so he’ll pick it up,” says Conadera who’s thankful her younger child is excelling academically. “She tells me to spend more time with her brother since she’s doing fine on her own.”

Synergeia’s Torralba says “one of the best gifts we can give our country is nurturing the minds and hearts of our children.”

“I don’t need my child to be extremely intelligent. What I need is a child who is loving and has respect for others,” says Berdan who has two kids in grade school.

Seeing her children grow up with the right values “gives me a greater sense of fulfilment as a mother,” said Berdan.

The pandemic-enforced learning system has also spurred volunteerism among some parents. Ferly Bones says she helps teach 15 mostly grade schoolers in her neighbourhood in Batad in central Iloilo province, allowing her to discover the potential of each child that may otherwise be overlooked in a regular school setup.

“There are children who can’t read but are good in drawing, so they have a skill that can be developed. I realised even the simplest kids have talent that can be nurtured,” Bones said during last week’s Synergeia-led workshop for parents of the Batad and Dumangas municipalities in Iloilo.

Alongside that epiphany, Bones says she realised “that even if I’m a simple mother, I can also be a teacher.”