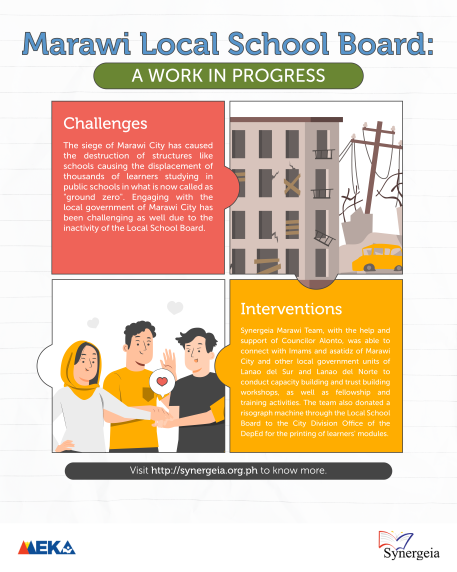 The siege of the Islamic City of Marawi affected nearly a million people.  Families lost lives and properties.  Structures like schools were burned down, displacing thousands of learners studying in public schools in what we now call “ground zero.”  Synergeia Foundation was one of the non-governmental organizations which came to Marawi to offer assistance.  Together with its partner multilateral institutions such as the USAID and UNICEF, Synergeia reached out to communities, parents, schools and local governments to advocate good governance practices for the effective delivery of education services to Marawi children.

Engaging with the local government of Marawi City has been challenging.   The Local School Board is not active.  There are members, as provided under the Local Government Code, but the board does not actively meet.  They say they are busy with their other responsibilities in the city hall.  This was aggravated when the pandemic occurred which constrained the holding of meetings and gatherings.

But the heavens sent us a strong advocate and ally in the person of Marawi City Councilor Abdani Alonto who is a member of the Peace Committee of the LGU.  The Synergeia Marawi Team comprised of Project Coordinator, Mr. Halil A. Bacarat, staff Mr. Fahad Balindong and Ms. Hanifa Mitomara, and young volunteers work closely with Councilor Alonto in all the Synergeia activities.  Councilor Alonto’s support during the capacity building and trust building workshops with Imams and asatidz of Marawi City and other LGUs of Lanao del Sur and Lanao del Norte is priceless.  Because of the Imams’ and asatidz’s respect for Councilor Alonto and his office, it became easier for the Synergeia team to connect and conduct the fellowship and training activities.   Councilor Alonto also served as facilitator in the SGC workshops and parents’ trainings.  He welcomed the opportunity to engage with parents, school administrators, teachers and barangay officials, and to listen to their problems.  He would take note of these challenges and promised to take these up with concerned offices in the city hall.

A miracle can happen.  In one meeting of the Northern Mindanao Regional Education Council which is chaired by Cagayan de Oro Mayor Oscar Moreno, Marawi City Mayor Majul Gandamra showed up and apologized for his absence in most of Synergeia activities.  He promised to be more active in programs for the education of children.

Slowly, the Synergeia Marawi Team has been able to reach out to the LGU.  When Synergeia donated a risograph to Marawi City for the printing of learners’ modules, the donation was made through the Local School Board which turned over the risograph machine to the City Division Office of the DepEd.  The LGU has also donated laptops and supplies for the printing of modules.

A Marawi Education Summit was successfully held in early 2021.  Local education summits are good venues to gather the community together.  They talk about the state of children’s education, identify problems and solutions, and get everyone’s commitment to the one goal of good education for all children.  Education summits foster community ownership of issues and solutions, and result in partnerships and collaborations.

The theme of Marawi City’s education summit, “Kayang-kaya kung sama-sama” (we can do it if we are together), is very appropriate.  The summit gathered stakeholders from the local government led by Marawi Mayor Majul Gandamra, DepEd Division of City Schools led by Superintendent Pharida Sansarona, school principals, parents, SGCs, Sangguniang Kabataan representative, cultural leaders and barangay officials.   The Mayor’s presence gave greater weight to the importance of coming together and collaborating for the good of the Marawi children.  Mayor Gandamra calls the children the nation-builders of the future and commits that “no child shall be left behind” despite the hindrances in Marawi.  He rallied all attendees to join hands together for the recovery of Marawi and for the education of the children.