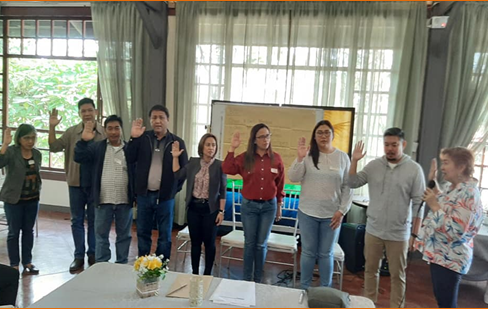 As early as March 2019, Mayors of Northern Luzon were already talking about ways to sustain the education reforms they have started.  They do not want to let their efforts fade away.  And so, on October 11, 2019 or after just seven months, they gathered together in Baguio City to formally launch the North Luzon Regional Education Council with lead convenor, Former Mayor and Synergeia Mayor, Mary Jane Ortega.   They agreed that their REC will be their vehicle to sustain and scale up education governance reforms.  They will provide leadership to LGUs in the region and come up with programs that will provide capacity building, sharing of lessons and best practices.  Overall, through their REC, they want to promote a brotherhood of Education LCEs in Northern Luzon.

Their first meeting was productive, eventful and inspiring.  They invited 2 private sector leaders whose companies have made Northern Luzon their home base.  Mr. Carlos Aboitiz of the Aboitiz Group and Mr. Tommy Valdez of San Roque Power Corporation talked about what keeps their respective firms devoted to helping the education of children.  Mr. Aboitiz said that the Aboitiz Group and Hedcor, Inc. believe in advancing business and communities in its drive to change for a better world. “We win only when we see also that our community wins.”  This principle is shared by Mr. Valdez.  He said their company aim is to build better communities.  He is proud to be part of the effort to develop workbooks in English, Science and Math in partnership with LGUs and through the help of Synergeia.   He said everyone should join hands to help others especially the poor so that through education, we can help our fellowmen especially the poor.  This was followed by Local Chief Executives – Mayor Juan Carlo Medina of Vigan City, Mayor Stefanie Eriguel of Agoo, Mayor Francis Fontanilla of Bacnotan and Mayor Hermie Velasco of San Gabriel who shared their experiences in pushing forward the education agenda in their respective LGUs.

This REC is one proud REC.  It has among its ranks 12 winners of the Seal of Good Education Governance, a prestigious award handed out to LGUs who display a strong commitment to improving education.  The magnificent 12 include Vigan City, Ilocos Sur; Agoo, Bacnotan, San Gabriel and Santol, in La Union Province; Solano, Kayapa, Villaverde, Sante Fe and Diadi in Nueva Vizcaya; Diffun, Quirino and Tuba in Benguet.

With the Northern Luzon LGUs now inspired and energized, they held a session to discuss their proposed by-laws and to elect the following as officers of their REC:

They agreed that capacitating the LSBs is their topmost agenda.  And they walk the talk.  They held 2 training workshops for Local School Boards in November 2019 – one for Region I and CAR members and the second was for Region II members.   The participating LSBs crafted their individual action plans based on their desired outcomes, and identified specific tasks, timelines and responsible persons.

In its first quarterly meeting this February 2020, the REC members talked about their experiences in reinventing the LSB.  New members shared how they expanded their membership, created programs on reading remediation, included principals in planning the utilization of the Special Education Fund (SEF), hired LSB teachers, used the Phil-IRI in looking into reading skills of children, and attempted to activate their School Governing Councils (SGCs).

Older members reported how they have federated their SGCs, hired reading teachers and expanded their reading programs.  The Municipality of Bacnotan and the barangays in Santol, La Union have allocated funds to create reading centers in the sitios.   In San Fernando, La Union, the DepEd has incorporated values formation in their lesson plans.  In Kayapa, Nueva Vizcaya, the LSB has created Little Free Libraries in each school.

Tuba, Benguet said it uses the “mother tongue” instruction only in classrooms where it applies.   Agoo, La Union has tapped the NSTP students in helping teachers in conducting remedial reading sessions to poor readers.   Villaverde, Nueva Vizcaya worked on improving the collection of the Real Property Tax (RPT) to increase the Special Education Fund (SEF).   Vigan City LSB has invested on a massive Summer Reading Camp for frustrated and instructional readers.  And Solano, Nueva Vizcaya LSB has been paying the salaries of daycare workers.

The North Luzon REC is leading the way among the six RECs and is first to meet again since the onslaught of the covid19 pandemic.  They did it via zoom last July 17.  They talked about how they can continue to share information and access trainings for the LSBs, SGCs, parents and teachers under the new normal set-up.  Many were eager and interested to get hold of the learning resources produced by Synergeia.

Like the north star which lights the northern sky and gives direction towards one’s destination, the North Luzon REC is our north star that shines brightly among the RECs, and inspires and leads our LGU partners through their journey towards effective education governance.