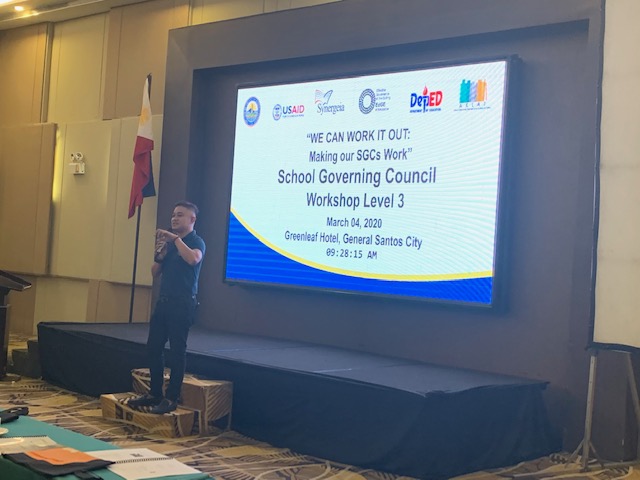 Following its promise to engage its stakeholders as partners for good education governance, General Santos City invited the Synergeia team once more to fully-hone its School Governing Councils (SGC).  They know there is much work to be done but Mayor Ronnel Rivera remains steadfast that he motivated the SGC members to be more active partners of the community in creating a brighter future for the children.

In the follow-up activity last March, the agenda for Gensan’s SGCs was clear – learn process skills to organize their teams in order to become functional and effective.  They want to be able to address issues like difficulty of finding qualified and willing officers, lack of teamwork, disruption in programs due to the yearly election of SGC officers, misconception ofSGC roles and responsibilities, insufficient funds and resources, among others.

They learned about developing teamwork, mapping the community for membership in the SGC and pointers on how to make meetings productive.  They learned to differentiate goals and tasks as prelude to their action planning activity.

During their action planning exercise, they brainstormed on the needs of their learners.  They identified specific interventions and activities that will support their school’s priority programs and improve students’ learning performance.  The different SGCs shared their plans during the plenary.   Most of their proposed projects focused on initiatives such as parenting workshops, remedial reading sessions, livelihood seminars, resource mobilization for facilities improvement, SGC organization, and health and wellness activities.

At the close of their workshop, the SGC participants shared their insights and their learnings.  Some of their takeaways include the significance of good teamwork, having a strong and sincere commitment to serve one’s school, knowing the roles and responsibilities of a SGC officer or member, the value of school-barangay partnerships, knowing the needs and priorities of the schools and students, addressing the problems one at a time, and showing respect to one another to promote harmony and camaraderie. They pledged to bring these nuggets of inspiration when they go back to their respective schools and work on an active SGC.

Before heading out, the participants gave their wish list to the city government.  School heads asked foradditional instructional materials for the conduct of their reading programs. There were requests for capacity-building on project proposal preparation to help schools in resource generation.   They also suggested to organize an SGC federation for the entire City of GenSan.